New generation of automation with payment via smartphone and credit card 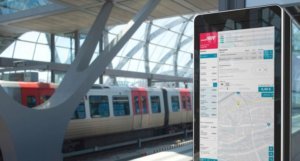 Hamburg: Large screens, user-friendly operation, cashless payment – the new self-service terminals from Hamburger Hochbahn AG (HOCHBAHN) for HVV customers are being rolled out. By mid-October, all 25 stops on the U3 and four other stops on the U4 between the main station and Elbbrücken will each be equipped with a new-generation ticket machine.

After extensive user tests at a total of nine stops in the entire underground network – including Kellinghusenstraße, Ohlsdorf and Horner Rennbahn – passengers will have around 50 new self-service terminals available from mid-October. These offer convenient selection options for destinations through a large-format map view. In addition to cash, the new terminals also accept debit and credit cards as well as payment via smartphone.

In parallel with the ongoing equipment, the next 150 self-service terminals are currently being produced and will be delivered from spring 2021. By the middle of next year, a total of around 200 machines will have been retrofitted at all underground stations.

The HOCHBAHN has a total of around 400 machines. The extent to which the rest will also be retrofitted will be decided in the coming year. Online ticket purchases via the HVV app, HVV switch app and online shop have been increasing steadily for a long time. Accordingly, the HOCHBAHN will evaluate the development of the use of the new and old machines in the coming year and build additional self-service terminals depending on customer needs.

The investments in the modernization of around 200 ticket machines amount to around 7.5 million euros. The new terminals with their service offerings are the result of an agile development project in which employees from various HOCHBAHN departments were involved.

Congratulations, dear anniversaries!
Scroll to top
Cookie-Zustimmung verwalten
Your visit to this site will be improved by allowing cookies. Necessary cookies help us to make the website usable by enabling basic functions such as page navigation. The website cannot function properly without these cookies.
Manage options Manage services Manage vendors Read more about these purposes
Show settings
{title} {title} {title}